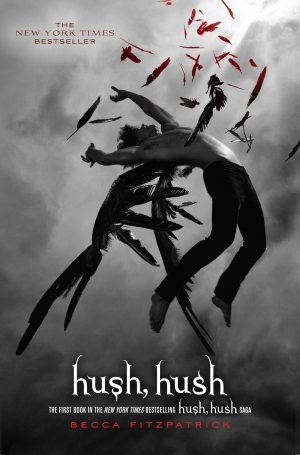 I’ve decided to review the books I read here. I have eclectic tastes, but I lean mostly toward the supernatural and romance genres. I don’t discriminate against books because of their target audience (teen books, for example). And if you like any of the books I’ve listed as owned and read on my Shelfari.com page, you’ll know that my taste reflects in my review. So here goes.

I read Hush Hush thanks to an advanced proof sent to our Hastings. The cover caught my eye, so I decided “what the heck” and tried it out.

First of all, let me say that I don’t usually like first-person stories, but this one was great. I didn’t really realize it was first-person; the plot was awesome enough to distract me from that. The characters were well developed, along with the introduction of the supernatural factor: angels.

The book entails a fallen angel’s actions and a high school girl’s feelings. It’s not just some corny romance (though there is some romance here and there), but instead a look at how a person can change even after a lifetime or two, or three, spent committing wrongs. It’s also about a struggle between doing what’s best for yourself and what’s better for those around you.

Without ruining the plot, I can’t say much else. But it’s a worth-while read. It officially comes out sometime this year, October 13th. Go read it!!

[where to find me]

[what I write about]

Just finished #AnatomyofaWitch by @owlkeyme.arts and wish it had spoken to me more (but it might be the right book for YOU)
Thanks to #NetGalley and @llewellynbooks, I had to pleasure to reading through an advanced copy of Cord Magic by Brandy Williams.
Finally finished my ARC of Cory Thomas Hutcheson's upcoming book - New World Witchery
Just looking around... lol
Do you want to read a book that will make you cry and laugh and cry again? @ashwritesbooks wrote an amazing story of grief and healing that I absolutely adored!
My coworker is SO lazy! 😜
%d bloggers like this: